Looking back on January 2019

Stock markets off to a good start in 2019

After a sharp pullback in late 2018, stock markets began the new year on a very positive note. The markets were reassured by the more conciliatory discourse of the chairman of the U.S. Federal Reserve and by the continuation of negotiations between the United States and China on a new trade agreement. 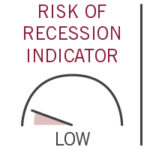 *All the percentages in this section are expressed in Canadian dollars.

Although they recovered part of December’s market decline, our Funds slightly underperformed their benchmark indexes in January. However, their relative performance was trending positively in early February.

Continued trade tensions between the United States and China remain the main risk to global growth, as the end of the 90-day truce between the two countries approaches and an agreement is still not in sight. Here are some other factors which could harm the economy and the markets.

Global Purchasing Managers’ Index (PMI)
This index is falling because of the marked slowdown in global growth.

Earnings growth
The decline in this indicator is due to the downward revision of earnings forecasts.

After the December 2018 market decline, we increased the equity weighting to 60% in the FDP Tactical Asset Allocation Private Portfolio. For now, we are still bullish on the stock market, while being aware that it is quite late in the current cycle. Pending the results of the negotiations between Washington and Beijing, we are maintaining our strategy of slightly overweighting equities in our Private Management approaches, for, among others, the following reasons: