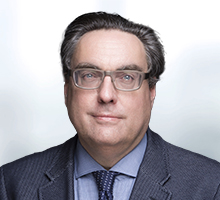 With more than 30 years of experience in architecture, Mr. Fortin has been a member of the Ordre des architectes du Québec since 1991 and is also a member of the Royal Architectural Institute of Canada.  After graduating from Université Laval in 1989, Richard A. Fortin began his career in Québec City working for large firms as well as in private practice. In 1997, he joined Bisson Fortin architecture + design, where he became an Associate Architect in 2000.

An experienced architect, Mr. Fortin is actively involved in managing many major projects across Québec, often as part of large interdisciplinary consortiums in the institutional, health and transportation sectors.

Mr. Fortin has been on the Board of Directors of the Association des Architectes en pratique privée du Québec (AAPPQ) since 2010 as a representative of the Laval-Laurentides region. A member of the Executive Committee since 2015, he served as Secretary-Treasurer from 2015 to 2018 and has been Vice-Chair since 2019. He is regularly called upon to act as the Association’s spokesperson to government authorities and negotiating tables to defend the interests of architectural firms and promote the quality of architecture in Québec.