Recessions: Can we predict them, and better yet, can we prepare for them?
Share this page Print this page

Can we predict them, and better yet, can we prepare for them?

The year 2019 has, however, brought back the spectre of a recession which, according to many economists, is inevitable in the next few years. This uncertainty is clouding the markets and adds to the tensions caused by weak global economic growth, the Washington-Beijing trade war and political upheaval in various regions of the world.

The ten-year cycle: myth or reality?

Must a ten-year period of growth necessarily end in a recession? Historically, nothing is less certain. An analysis of past economic cycles in Canada shows that in the vast majority of cases, rather than a temporal recurrence, the start of a recession coincides with excesses in the economy, such as sharp rises in interest rates or some type of economic shock, and that it can be precipitated by the collateral damage of monetary policy. Note in this regard that we are monitoring ten economic indicators that help us assess the risk or probability of a recession.

The graph below shows the historical data of the Canadian economy and the events that triggered a recession. Our economy has had four recessions in the past 40 years: 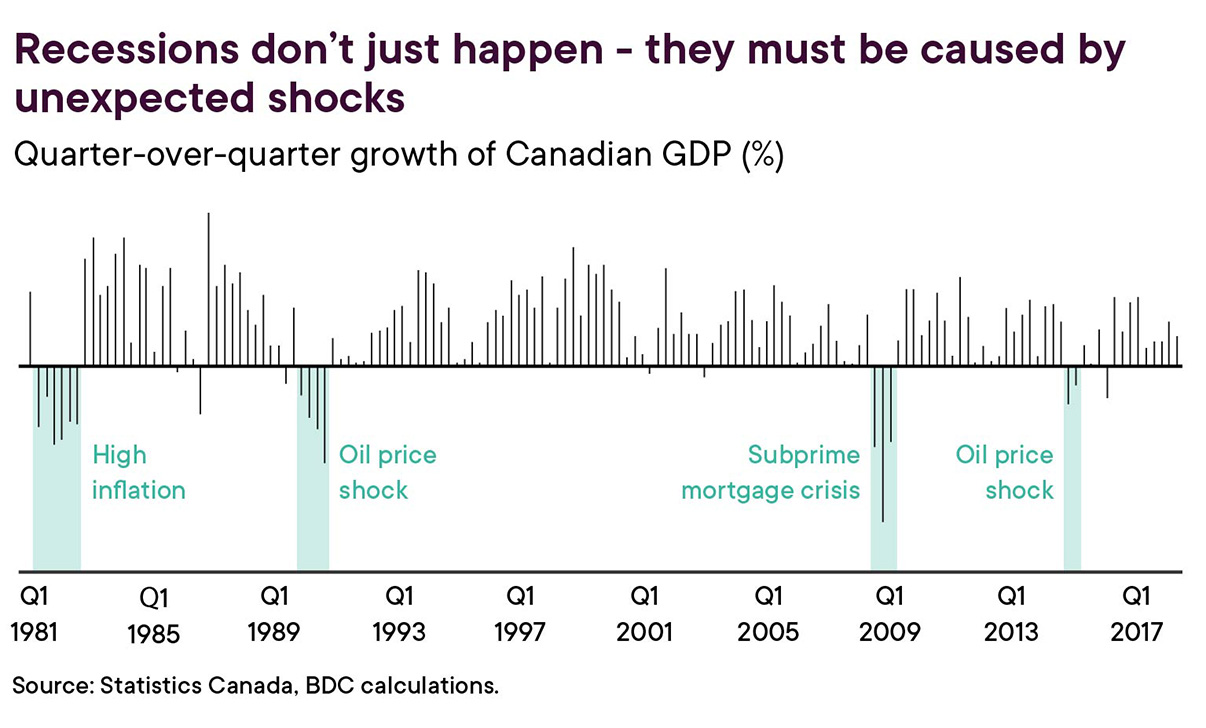 While the current economic cycle is much longer than average, it is also one of the weakest in terms of economic growth as well as revenue and earnings growth. Productivity gains and technological advances in industry have had a decisive effect on the cycle, with the global economy currently undergoing sudden and profound changes. Increasingly efficient, the financial markets are now able to recover more quickly, as witness the 2008 crisis. So it is very difficult to compare the current cycle to previous cycles.

For a country, a recession is often a difficult period which can, however, have positive repercussions. For example, businesses that want to retain their market share have to innovate to improve their competitive positioning. Periods of recession are also conducive to the creation of small businesses, whose agility enables them to compete with bigger firms because they can innovate at a lower cost than their rivals.

Impact on an investment portfolio

“Will a recession lead to losses in my portfolio?” That’s the question that all investors ask, and the fear of a sudden market plunge as they near retirement is a prospect that haunts some who lived through the 2008 crisis. The answer to this question essentially depends on the composition of your portfolio: if it is aligned with your investor profile, it will enable you to better weather market turbulence and recover more quickly.

Know also that because of the lessons learned over the past few decades, central banks react more swiftly to the first signs of recession and intervene directly in the economy by lowering interest rates and increasing the money supply. Rate cuts have an immediate impact on bond prices: when interest rates fall, bond prices rise. If part of a portfolio’s assets is invested in fixed-income securities, it will increase in value and support the portfolio.

The targets of recession

Considering all the sectors in which you can invest, it turns out that certain types of businesses are much less affected by a recession than others. The consumer staples sector, for example, generally remains more stable because demand for its products does not fall, even during an economic slowdown.

It’s also good to know that the businesses that are hardest hit during a recession are often those of lesser quality. Active portfolio management then becomes a big ally since good managers avoid these companies.

A seasoned manager will also be able to capture a higher percentage of market upside than downside. For example, since 2011, the Canadian Securities Approach, Income – Securities, which is offered to our Private Management clients, has captured 91% of the upside of the S&P/TSX Dividend Index and only 66% of the downside.

On average, recessions last three to nine months. It is certainly not easy to see the value of your portfolio decrease from one month to the next, but tell yourself that such declines are only for a short period and that the biggest market gains generally occur immediately after the market has bottomed. Although the temptation is great to limit your losses by selling your stocks, the decision to exit the market too early could be a mistake that will harm the subsequent growth of your portfolio. By staying invested, you will be able to profit from a quick rebound and recover faster.

An integral part of economic cycles, recessions will continue to confront investors, but they are not necessarily catastrophic for a portfolio. Once again, it all depends on their depth, their duration, and especially the way in which your portfolio was constructed. If your portfolio is aligned with your investor profile and your risk tolerance, it will be resilient in all phases of the cycle and enable you to achieve your financial objectives. And don’t forget that your investment policy evolves over time and that it must adapt to your life circumstances, not vice-versa.

Have questions? Your advisor is your front line resource person and he will be pleased to speak with you.