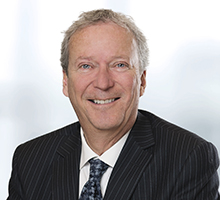 During his successful 35-year career with PwC, Mr. Dugal held various positions and performed key mandates. From 1998 to 2014, he led the financial institutions practice for Quebec and in 2003, he was elected to the board of directors of PwC Canada as well as to the firm’s finance and governance committees, where he served until 2017.

Among his important mandates, Mr. Dugal led numerous audit and advisory missions for major Swiss and Canadian clients in the banking, insurance, securities brokerage and mutual fund sectors. From 2005 to 2013, he served as PwC’s associate director of audit and certification services for Quebec, while sitting on the firm’s Canadian executive committee for audit services.

A graduate of UQTR in 1981, Mr. Dugal is a member of the Institute of Corporate Directors and a Fellow of the Ordre des comptables professionnels agréés (CPA). Actively involved in the oversight and development of the accounting profession, he was a member of the board of the Ordre des CPA du Québec from 2006 to 2016 and served as chairman of this organization from 2014 to 2016.

Mr. Dugal’s expertise and experience make him a much-sought-after director. He currently sits on the boards of CPA Canada and Éducaide, an educational assistance fund whose mission is to encourage high school students to stay in school and pursue their education.