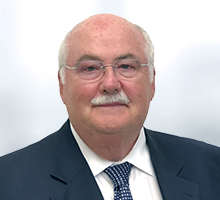 As a notary, legal advisor and consultant, Mtre Gaudreau has extensive private-practice experience in business law and corporate, commercial and institutional law, as well as estate planning and settlement.

He was a partner in the notarial firm Gaudreau & Lessard and in Michel Y. Gaudreau, notaire et conseiller juridique inc. for more than 42 years, and has also worked for Laquerre, Notaires inc. in recent years. Since 1994, he has been involved in the Chambre des notaires du Québec as a member and then as Chair of the Compensation Fund Committee, in addition to serving as a member of the Board of Directors. Since September 2004, he has been a member of the Board of Directors of the Corporation de service des notaires du Québec, serving as Vice-President from 2004 to 2019 and as President since November 2019.

After obtaining a Bachelor of Arts at the Université de Montréal, Mtre Gaudreau earned his Licentiate in Laws and Diploma of Notarial Law at the University of Ottawa. He was awarded the Medal of Honour of the Chambre des notaires du Québec in 2011 and has been a notary emeritus since 2017. Mtre Gaudreau has also sat on the boards of numerous public and private companies.