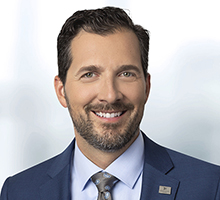 Head of the Eastern Quebec team, Guillaume Nadeau is responsible for the coaching, training and mobilization of our wealth management advisors and assistants.

Mr. Nadeau has been involved in finance since 2003 and, throughout his professional career, he has stood out for his determination and his rigour. Both with Desjardins Group, where he held various positions, including financial planner and head of business development, and with Gestion MD, where he held a management post for six years, Guillaume Nadeau demonstrated his leadership skills and his client-first approach. Having participated in many major projects, he is able to convey his vision to his team, while remaining strongly focused on results.

Mr. Nadeau holds an MBA from the Université du Québec à Trois-Rivières (2009) and obtained the Financial Planner designation from the Institut québécois de planification financière (IQPF) (2008). He is also Fellow of CSI (FCSI®), which is the most senior credential in Canadian financial services.