Stock markets fall around the world

Global equity markets had their worst month of the year in May, mainly because of the escalating trade tensions caused by the United States. From the economic standpoint, some countries are faring better than others, but the trend seems to be pointing to a global slowdown. 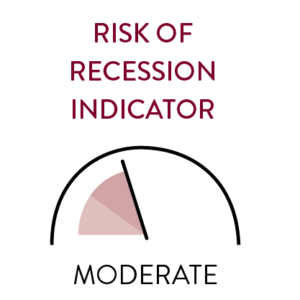 Our FDP fixed income portfolios did especially well in May. As for the FDP Canadian Equity Portfolio, it still ranked among the best funds of its kind in Canada.3 Our FDP US Equity and Emerging Markets Equity Portfolios ranked in the third quartile, even though they are aligned with the benchmark indexes specified in their investment strategies.

Several risks are likely to have an impact on the economy and the markets:

Expansion of the U.S. money supply

Over the past six months, the growth of the money supply in the United States has been practically nil.

Three cuts in the key rate are expected in the United States over the next 12 months, suggesting that the market considers the current rate too high, given the economic uncertainty.

Valuations improved, with the price-to-earnings ratio declining slightly from a multiple of 16.7 to 16.

We reduced the equity weighting in the FDP Tactical Asset Allocation Portfolio by 10% in May, and also changed the weighting in our balanced portfolios. Currently, fixed income is overweight, the cash level is up slightly and the equity weighting is in line with the targets, all of which corresponds to a defensive positioning in a context in which geopolitical risks are still present.

Even though the current cycle is advanced and the trade war between China and the United States is heating up, we remain optimistic about the outlook for the stock market but will proceed cautiously.