Patterned after Louis X, the Stubborn

“Speaking more than acting, and so numerous at the bedside of this noble patient that they drowned each other out, they counseled only ineffective remedies for which they could not be held responsible.”
– Maurice Druon, The Accursed Kings

A brief look back will give us a sense of how the markets have performed since then and the challenges that lie ahead, while recommending the solution offered by our firm, which is available to all of our clients. 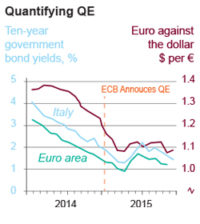 Voltaire and modern finance, published in fall 2012, drew parallels between the measures employed by our central banks, and medicine in the Age of Enlightenment. The article described the different forms of QE (quantitative easing) used to create inflation and stimulate the economy by reducing borrowing costs and devaluing currencies. Four years later, signs of inflation are muted and QE in Europe does not seem to have had its intended effect. 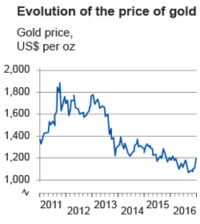 Voltaire and the colour of safety, published in winter 2013, examined the place of gold in your portfolio, and the relationship between the value of the yellow metal and the U.S. dollar in financial crises. The article showed that gold is inversely correlated with the value of the greenback. From September 2012 to December 2015, gold fell from US$1,775 an ounce to US$1,060 (high of US$1,883 in 2011), while the DXY (an index that measures the USD against six currencies) rose from 0.80 to 0.98 during the same period, i.e. a 40% decline for gold versus a 25% gain for the DXY.

Bubble, fly away, published in winter 2014, warned readers against the famous bitcoin. The article looked at the tulip bubble of 1637 and suggested that this virtual currency could suffer the same fate. The chart illustrated the parallel between the two situations.

From banks to shadow banks,  published in fall 2014, showed the similarity between the banking activities of certain institutions and the actions that have led to the major financial crises since 1792.

Louis the Stubborn is not doing well

What do the next few years hold? A wave of volatility has shaken the stock, bond and currency markets since the beginning of 2016. On March 9, bloomberg.com wrote that the volatility of the S&P 500 is the highest it’s been in the past 78 years, with movements of 1% or more on 56% of trading days since January, making these first few months the most volatile since 1938, in the midst of the Great Depression. Central banks have tried to boost the stock market with QE, but signs of inflation remain weak or even non-existent. Continuing these programs is not likely to help the markets. Interest rates are very low and further rate cuts will not raise the inflation outlook.

In the U.S., QE considerably decreased the value of the greenback between 2008 and 2012. When the Fed started to reduce its bond purchases in late 2012, the U.S. dollar began its rise and gold fell 40%. Could the trend reverse now that the dollar is in vogue?

With regard to bonds, the only segment of the market that has experienced high volatility and a devaluation is high-yield bonds. The rest of the market is still stable and offers protection against stock market volatility.

The negativity surrounding the banks is unwarranted. Bank stocks have all tumbled due to the uncertain environment, with declines of 19% in the U.S., 24% in Europe (31% in Italy), and 36% in Japan. Although our system is solid, Canadian banks have not been spared, but the losses have not been as heavy. There are many possible reasons for the slump in bank stocks, the most likely being the global economic slowdown, as evidenced by the Baltic Dry Index*.

* A shipping and trade index created by the London-based Baltic Exchange that measures changes in the cost to transport raw materials such as metals, grains and fossil fuels by sea.

Interestingly, with QE becoming less popular, other, unconventional stimulus methods have appeared. A good example is the negative interest rates implemented by central banks in Switzerland, Denmark, Sweden and Japan. The jury is still out as to whether this remedy will prove effective, or ineffective like those offered to Louis the Stubborn and Voltaire’s compatriots.

Hello, Japan. The International Monetary Fund (IMF) is regularly downgrading the global growth outlook, and some, like Larry Summers, former Secretary of the Treasury of the United States, see many years of low growth, low inflation and low interest rates ahead1.  An outlook similar to what Japan has experienced since the Nikkei peaked in December 1989, where a 75% devaluation of the yen has resulted in more than two decades of deflation.

Despite persistent deflation, a sharply depreciated currency, negative interest rates, an astronomical debt-to-GDP ratio of 250%, and GDP growth of less than 1% for the past decade, Japan remains one of the best countries in the world in terms of quality of life, both for individuals and as a society, with a low crime rate, a very long life expectancy, and unparalleled education and health care systems.

Globally, economic institutions and policies focus on GDP growth and household income. Is GDP, an economic measure that arose out of the Great Depression, really so important? Undoubtedly, if we focus only on the stock market, which fluctuates according to the outlook for growth and inflation. But let’s look at the situation from the point of view of cost of living, one of the key measures used by our tax specialists when establishing a financial plan.

Although there seems to be a correlation between income growth and quality of life, the inflation rate also has an impact. The fear of deflation is due to the loss of quality of life, but is that realistic? Major economic changes seem to be occurring now which could alter the inflation outlook and have positive repercussions. The decline in oil prices is due in part to shale gas (drop of about 35% in the price at the pump).

It’s normal to be concerned about the state of our portfolios, but we should let the central banks and politicians examine the patient and try to revive it, irrespective of whether the remedies they devise are effective or ineffective. Regardless of the interventions, the big changes now occurring will move the markets. What’s important is to protect your assets and ensure that your quality of life is maintained.

Unlike many wealth management companies, we have a team of specialists, including financial planners, tax experts and notaries, who are available to all of our clients. Working closely with them, your Wealth Management Advisor can help you by developing a structured plan according to your personal situation. Our role is to assist you and guide you as your professional and personal needs evolve. Your responsibility is to understand the need for a financial plan.

Let the politicians and central bankers worry about the GDP, economic growth and Louis X-style remedies. Let us take charge of maintaining your quality of life.