The U.S.-China trade war has caused a great deal of economic uncertainty over the past few quarters. The result: lower international trade volumes, a contraction of manufacturing activity in many developed countries, including Canada and the United States, as well as a downgrading of estimated corporate earnings.

In response to these economic data, the U.S. Federal Reserve (Fed) has lowered its benchmark rate by 25 basis points three times since July, bringing it to its current level between 1.50 and 1.75, whereas the Bank of Canada left its policy rate unchanged during the same period.

How to explain this divergence and what can we expect in the coming months?

Canadian inflation and employment data have been robust since early 2019. In fact, the Bank of Canada’s three preferred measures of inflation are all symmetrically positioned around the middle of the Bank’s target inflation band of 1% to 3%. In addition, the net job gains since the beginning of the year are in large part full-time jobs and are significantly higher than economists’ estimates. During this same period, we have seen upward pressure on hourly wages, which is consistent with the low unemployment rate. All these conditions, combined with a high average level of Canadian household debt, were sufficient to keep the policy rate unchanged at 1.75% for now. 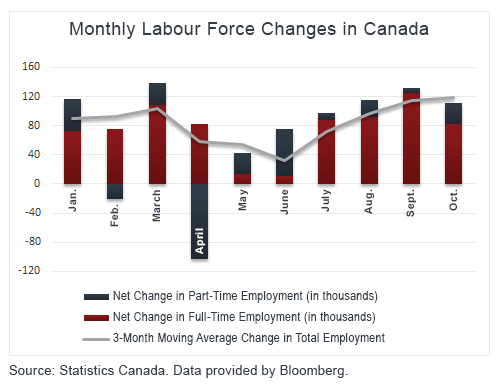 In the United States, the situation is different because both growth and forecast growth for the next few quarters have fallen considerably, due primarily to weakness in exports and business investment. U.S. inflation expectations for the next twelve months will undoubtedly be slightly below the target of 2.00%. Combined with geopolitical risks, these conditions prompted the Fed to lower its benchmark rate by 75 basis points between July and October. 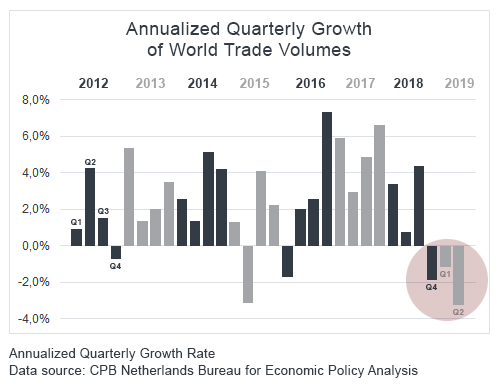 These diverging trajectories have impacted the yield curve, with the Canadian curve flattening more than the U.S. curve. 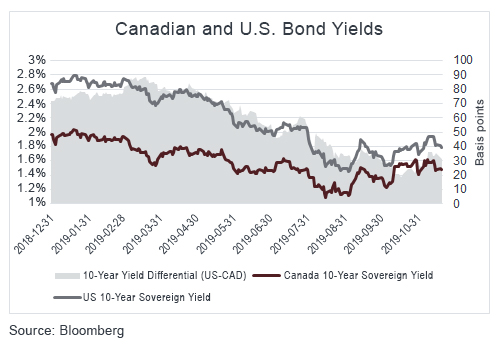 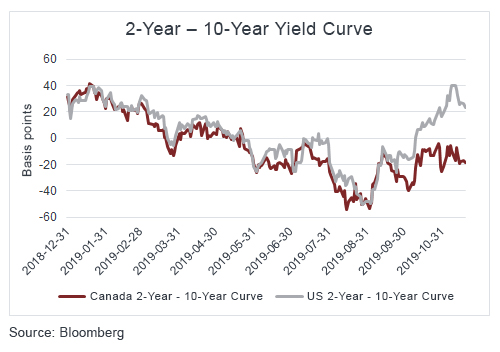 We remain optimistic about the direction of credit spreads on quality corporate bonds in the coming months because of the accommodative monetary policies of the major central banks and persistently low interest rates, which reduces risk premiums.

In addition, we believe that Bank of Canada governor Poloz will also be more accommodative if there are signs of weakness in the Canadian economy, as he suggested in his latest speech in October.